Interest rates in most of the developed world are at historical lows with the yield on traditional income producing assets like bonds also at lows not seen in decades. This presents a challenge for investors who now need to look for alternative ways to generate income. This can be especially important for those investors who rely on the income from these investments to fund their retirement.

Why are Interest Rates so Low?

Interest rates are a tool used by the U.S. Federal Reserve (the Fed), and other global governing bodies, to either kick-start or curb growth within the economy. As expressed in the graph above, when growth is low the Fed will has historically reduced interest rates, making it cheaper to borrow which is intended to cause businesses to invest, which creates jobs, which increases the wealth of employees who then consume more. The reverse is true. When growth is too high, inflationary pressures generally reduce purchasing power. To combat this, the Fed has historically increased rates, making borrowing more expensive thereby dampening economic growth and encouraging savings. Over a full economic cycle, the Fed has sought to use rates to maintain an equilibrium between growth, employment and inflation.

In history, the Fed has only reduced interest rates to near zero-rate bound (targeting under 1%) three times. The first time was in following the 9/11 attacks in 2001. The second was the 2008 Global Financial Crisis, where rates remained at this level for 7 years, attempting to compensate for a uncooperative fiscal policy. The third time was in March 2020 in response to the severe economic shock resulting from the COVID-19 pandemic. It just so happens that all of these examples of extreme monetary policy occurred in the past 2 decades. This is clearly the new trend since even in the depths of The Great Depression the target rate never fell below 2%. As in the past, the Fed will over use low interest rates to help restart the economy. A problem however is that the Fed rate acts as an anchor, effectively weighing down all other market interest rates. This can leave investors seeking alternative options to replace lost yield. So where should investors turn?

When investors think about income, they traditionally think of bonds and they have come accustomed to utilizing them for income. Over the past 40 or so years, since the peak of the last interest rate cycle in 1981, the benchmark 10-Year Treasury Note has paid out on average 5.5%, conditioning investors to expect a yield around this level. However, if we zoom in on just the past 20 years this average yield drops to just 2.9%. In addition,the current interest rate on the U.S. 10-Year Treasury is just 1.8%, well below its average and the expectations of investors. This is a significant income shortfall for traditional fixed income investors. 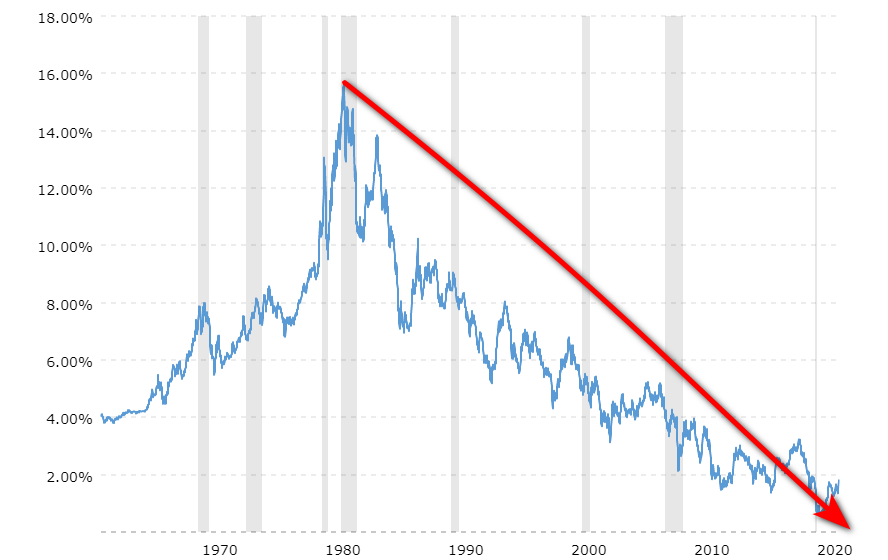 Looking at other traditional income sources, the iShares U.S. High Yield Bond Index is generating just 4.8%. This higher yield reflects the compensation for the higher risk of these bonds which are considered non-investment grade, or junk bonds. Shifting to equities, investors have historically averaged a 2.1% dividend yield on the S&P 500 since 1990 and at a higher level of overall risk. Both of these options may involve a tradeoff for the investor. Either increase risk to achieve a similar level of income in the case of the high yield bond, or reduce the desired income in favor of an increase total return while at the same time increasing exposure to the risk of stocks. By looking more broadly to alternative sources of income however, investors can potentially access some attractive income streams that have the benefit of diversification.

Today, real estate, infrastructure, and direct lending through Private Placement Securities all deliver more income than investment grade bonds or stock dividends. Rather than the income payments being dependent solely on the success of the underlying company, which rely on those companies generating profits, they can be derived from interest on real estate development, rental payments on real estate, or tolls and fees associated with infrastructure.

An additional benefit that these investments have is that their yields are not correlated with global bond yields or the Fed Funds Rate. This means that they are less sensitive to the movements in the price and yield of bonds thereby diversifying some of the risk associated with a traditional portfolio that includes just stocks and bonds.

By simply casting a wider net for alternative sources of income, like those offered by Mid Atlantic, investors may supplement the lost income of traditional bonds, while diversifying their portfolio.